In 1941, the Park Theater cinema opened with much hype and plenty of hullaballoo in a small, thriving town eager for entertainment ...

Lafayette, California, like so many other communities, was still rebuilding from the Great Depression. It shared as well the country’s increasing concern with the rhetoric of war abroad.

Elwood P. Laws, born in Oklahoma in 1905, was 36 years old, married to Margaret, and a resident of Walnut Creek when he built the new Park Theater in Lafayette in 1941. He had already bought the Ramona Theater (corner of Cypress and Main) from Theodore Berling, the first chief of police in Walnut Creek, and had already built the $75,000 El Rey Theater, two blocks north on Main St. in 1937. It was demolished in December 1983.

The prospect of a real theater dedicated to showing movies from glamorous Hollywood enthralled the citizens of Lafayette — and the fact that their new theater had been designed by the preeminent cinema architect, William B. David, designer of over 25 successful cinemas up and down the Golden State and in Oregon, made this thriving little town very proud.

The Park was scheduled to open July 15 but actually opened August 21, 1941. Its design was simple: classic lines, seats and carpet described as “plush,” and a color palette of blues, ivory, and maroon. Peach-toned walls of the ladies’ room combined with indirect lighting flattered the female patrons. The general contractor was from San Anselmo, the sheet metalist from Martinez, the electrician was from Crockett, but the plumber was local - Jack Smith, proprietor of Lafayette Plumbing and Supply. Three usherettes were hired, one recently graduated from Acalanes High School for her first job. The opening night film? Abbott and Costello’s 'Hold That Ghost.'

Thanks to the extensive research and reporting of architectural historian Valerie Vann of the Davis Historical Resources Management Commission, it is known that Park architect William Bernard David's Armenian family immigrated to the U.S. in 1890 from what is now eastern Turkey. Though he was born in Brockton, Massachusetts in 1905, before 1920, his family had moved to Fresno and by 1930, they had moved again to Los Angeles.

David had an eclectic career. He served with Redwood Theaters in Northern California from 1935 until 1943. He was then in charge of production of Action Pictures, Golden Gate Pictures, and Lida Productions from 1943 to 1947. Although specific dates seem to be unrecorded, during these years he also studied with, and worked in the theater architectural firm of renowned Streamline Moderne architect S. Charles Lee (born Levi) before striking out on his own.

David found a home for his company, William B. David & Associates, Industrial Design, in the Warfield Theater office building in downtown San Francisco. His company's name reveals his focus. Though not a registered architect like his mentor Lee, David was certified as a "registered building designer." For the Redwood Theaters chain, David was construction manager, construction supervisor, and customary architect. As his IMDb page shows, in the 1940s in addition to designing buildings, he produced nine films. 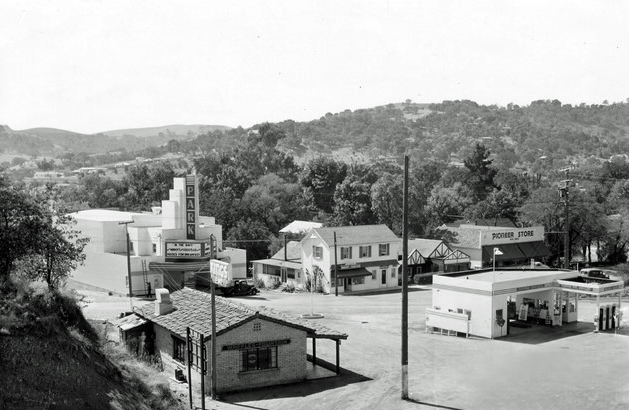 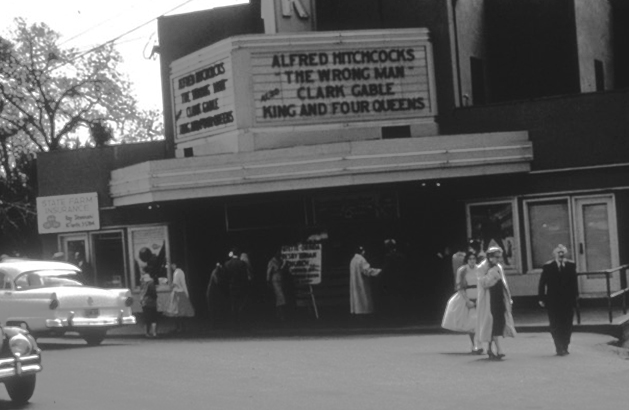 David’s cinemas were known by their Streamline Moderne style. As defined in Wikipedia, the constraints of the Great Depression cut short the more flamboyant architecture of Art Deco and replaced it with Streamline Moderne. Clean, unadorned surfaces, sweeping horizontal lines, and curved corners better represented the new drive to efficiencies in industrialization, and speed in transportation. The country was on an aggressively modern trend, and the new architecture captured that vibe.

David’s distinctive designs had an appropriate austerity that, for all their somewhat frivolous function, reflected the economic hardships of the time but still held hope for the future. They were relatively inexpensive to build because there was little labor-intensive ornamentation. Exteriors tended to be concrete or stucco; interiors comfortable but serene.

Still scattered throughout California’s smaller towns, and even in large cities like San Francisco and Los Angeles, William B. David’s cinemas remain – architecturally notable in function and form, and many still thriving today.

Special thanks to Cecilia Kilmartin for her extensive research, and Judie Peterson of the Lafayette Historical Society for her valuable resources.

In 1954, the Park Theater doubled as a place of worship for newly founded Lafayette Orinda Presbyterian Church ...

An excerpt from LOPC Archives

“The Worship Committee had done its homework and found the ideal spot to meet. It was the Lafayette Park Theater, which was certainly not in use for movies on Sunday morning. . . . Sunday services were now held regularly at the Park Theater, but not without great ingenuity on the part of the same, hard-working task force (that founded the church).

Transforming a Saturday night movie house into a house of worship in one hour on a Sunday morning was no small order! Spotlights were rigged to shine on the worship center, which unfortunately simultaneously illuminated and blinded the minister. An aged upright piano was donated and hidden in the wings to be rolled in and out. Elder Haakon Johnson hurriedly designed and constructed a fold-out grey combed-plywood rostrum. Flower chairman Velma Clement and her committee took turns arriving early to fill two large urns with fresh flowers. Loyal member Raymond Dear rushed over early to open wide the doors, hopefully to air the place out while head usher Jack Everett hurriedly distributed the hymnals and helped set things in order. Chief welcoming committeeman Charles Butler placed the sandwich board church sign out on the sidewalk and by 9am, the theater was transformed into a place of holy worship.

This family of worshippers, grateful to have a place, tactfully ignored the lingering remnants of popcorn, cigarette stubs, and candy wrappers... Pastor Carl Thomas often humorously suggest as fitting texts for his sermons, some of the movie marquees such as The Flesh and the Devil [a silent film starring Greta Garbo, released in 1926] or Heaven Can Wait [starring Don Ameche, released in 1943]. Carl loved the sound of laughter and knew well how to provoke it. The congregation in the theater continued to grow in numbers and in spirit.”

Special thanks to Lexi Morrissey and Lafayette Orinda Presbyterian Church for the use of their archives.